Musings of a Maverick Methodist on the Hypocrisy of American Christianity

Webster defines hypocrisy as pretending to be what one is not; especially a pretense of virtue or piety.  If hypocrisy is about practicing what we preach and Christianity is about following Jesus as the word of God, then most white American Christians are hypocrites.


Jefferson was vilified by church leaders of his day for ignoring exclusivist Christian beliefs in the divinity of Jesus while emphasizing his moral teachings.  Even so, Jefferson was elected the third president of the U.S., serving from 1801 to 1809. Over 200 years later a majority of white Christians elected Donald Trump as president--a man whose morality is the antithesis of that taught by Jesus--claiming that Trump was chosen by God to be president.


Ironically, Donald Trump makes Thomas Jefferson look like a saint.  Trump’s election by a majority of white Christians made a mockery of the Christian religion, and made his Christian supporters hypocrites.  For most white Christians, Jesus has become a surrogate Christian god and the patron saint of Trump and his Republican Party, offering cheap grace to those who promote distorted evangelical “family values” and a materialistic prosperity gospel.


This evolution of Christianity was made possible by a church that subordinated the moral teachings of Jesus to exclusivist beliefs in Jesus as the alter ego of God.  Jefferson argued that while Christian morality was relevant to politics, mystical Christian beliefs had no place in the public square.  Since the time of Jefferson, the vast majority of Americans have considered themselves Christians, and their moral standards have shaped the American civil religion.


Jefferson was a child of the Enlightenment whose emphasis on the moral teachings of Jesus was based on reason and advances in knowledge.  Those teachings are summarized in the greatest commandment to love God and to love our neighbors, including those of other religions and races, as we love ourselves.  That’s a common word of faith and politics for Jews, Christians and Muslims, and history has proven its universal truth--primarily by its absence.


The emphasis in church doctrine on belief in the divinity of Jesus and the Trinity was never taught by Jesus.  It’s the product of man-made theology that began with Paul’s atonement doctrine. Even so, worshiping Jesus as God’s blood sacrifice to atone for original sin should motivate Christians to follow the teachings of Jesus as the word of God; but it hasn’t had that effect--probably because worshiping Jesus is easy and popular, while following him is neither.


It’s understandable that the ease of exclusivist beliefs has taken precedence over the cost of discipleship, but that’s no excuse for the hypocrisy of cheap grace.  The gospel accounts are clear on the subject. What’s worse is that a majority of white Christians have allowed an immoral and unholy gospel of Trump to trash the gospel of Jesus.  That’s a form of hypocrisy that must be condemned by all who believe the teachings of Jesus are the word God.


This image on The hypocrisy of American Christianity is from Occupy Democrats (Facebook 2 Feb 19): 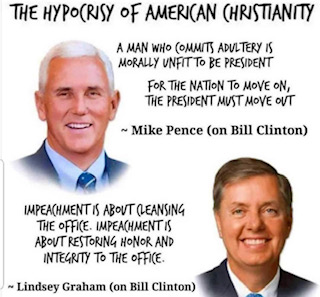 On how the moral teachings of Jefferson’s Jesus relate to political legitimacy for Christians and Muslims, see the Introduction to The Teachings of Jesus and Muhammad on Morality and Law: The Heart of Legitimacy, posted in Resources at  http://www.religionlegitimacyandpolitics.com/.