Musings on a Zombie Economy Fostered by the Federal Reserve

One out of five corporations on Wall Street is a zombie corporation that cannot survive without Fed assistance. They are like spoiled children in a privileged family, with the Fed assuming their bad debts and helping them borrow money that they can’t pay back.  America now has a zombie economy, with banks at risk with trillions of dollars in zombie loans.


Since the 2008 recession the Fed has been praised for saving the economy with its low interest rates and quantitative easing.  In retrospect, by putting failed corporations on life support the Fed may have done more harm than good.  In a healthy capitalist economy, failed businesses should be allowed to die a natural death.  No corporation should be too big to fail.


America’s economy was anemic before the pandemic triggered the stock market crash in March.  The excessive debt of corporations and their overvalued stock made them dependent on the cheap money of the Fed and artificially low interest rates to avoid failure, but the likelihood of zombie loans going bad now threatens to turn a recession into a depression.


The stock market and the wealth of billionaires have surged in the pandemic, evidence of the distorted results of Congressional and Fed relief measures that have promoted crony capitalism.  Most economists no longer expect a  quick “V” shaped recovery, but anticipate the stock market will falter again with a slow recovery that will take years rather than months.


As in 2007, banks once again have too much bad debt on their books.  This time it’s corporate debt and not home mortgages that have gone sour and are threatening the failure of zombie corporations that cannot survive without Fed support.  It’s an exaggerated repeat of 2008 with more severe threats, but there are limits to what the Fed and Congress will do.


Economic justice requires an end to Fed subsidies to the zombie corporations of Wall Street while providing assistance to the smaller businesses on Main Street.  That would reduce disparities in wealth between the rich and a diminishing middle class.  The economic class divide in America denies economic justice as it becomes increasingly polarized and oppressive.


Race is a factor, but it’s not the only factor causing disparities in America’s wealth.  The Fed favors the mega-corporations of Wall Street over the smaller businesses of Main Street.  The next time the big ones on Wall Street fail, they should not be rescued by congressional aid or Fed subsidies, but be allowed to fail and split up into smaller sustainable corporate entities.

Over the years the Fed has supported mega-mergers on Wall Street that have increased economic disparities and reduced the competition needed for a healthy economy.  It’s time to provide for the common good and reverse that trend.  The Fed should not be sustaining zombie corporations and it should provide incentives for mega-corporations and megabanks to split up.  Bigger is not better, except for the super-rich and the zombie corporations on Wall Street.


David Lynch has described how the government’s response to the coronavirus has unleashed zombie firms:  “Nearly one in every five publicly traded U.S. companies is a zombie, according to data compiled by Deutsche Bank Securities. That figure has doubled since 2013 and is up dramatically from the late 1990s, when there were almost no half-dead companies staggering across the landscape.
Years of ultralow interest rates intended to stimulate the economy after each of three 21st-century recessions created the conditions for zombies to proliferate, according to economists. Since the pandemic sideswiped the U.S. economy in March, the Federal Reserve has again lowered borrowing costs to near zero and further eased credit conditions by purchasing corporate bonds.
The Fed’s actions have drawn widespread support as an antidote to the pandemic-inspired economic collapse. Making it easier for companies to obtain financing should prevent countless business failures and millions of additional job losses, economists said. But that short-term success may breed long-term weakness, sapping productivity, investment and the economy’s competitive fire once the crisis passes.
...Like a recuperating hospital patient relying on painkillers, the economy needs cheap credit to recover. But used for too long, low interest rates act like a narcotic, leaving the economy craving easy money and unable to thrive without it.
...Weak growth prompts the central bank to cut interest rates, which allows zombies to multiply. A growing number of zombified companies further erodes the economy’s strength, leaving central bankers reluctant to raise rates from their zombie-friendly levels. And the cycle repeats, keeping failing firms alive and interfering with the emergence of more productive competitors.
After the 2008 financial crisis, the Fed kept rates near zero for seven years, then raised them in tiny increments until 2019, only to start cutting them again. With May’s 13.3 percent unemployment rate suggesting a long recovery lies ahead, Federal Reserve Chair Jerome H. Powell earlier this month said the central bank is “not even thinking about raising rates.”  That means more years of near-free money, an additional surge in business borrowing and thus more fuel for zombies.
Nonfinancial business debt grew in the first quarter by almost 19 percent, the biggest percentage jump in at least 40 years, according to the Federal Reserve. Businesses took on more than $3 trillion in new debt in the first three months of 2020, almost 10 times as much as in the previous three months.
All that borrowed money was needed to replace revenue lost when the pandemic forced most factories, workplaces and retail outlets to close for several weeks. Without the borrowing surge, millions more Americans would have joined the 21 million workers currently idle. But at more than $16.8 trillion, business debt tops 78 percent of the economy.
...The epic economic collapse that began in March brought numerous corporate borrowers closer to zombie status, particularly in the retail and energy sectors. The number of corporations that S&P Global rated “CCC” or lower -- a sign of unsustainable finances -- reached an all-time high of 256 on May 31, according to Gregg Lemos-Stein, S&P Global’s head of research for corporate ratings.
That is nearly twice as many as at the peak of the 2008-09 crisis.
...While there is no formal definition of the term, companies that fail to book sufficient profits, or operating income, to cover their annual debt costs for three straight years are generally considered zombies, economists said.
...The extraordinary central bank action that has kept credit unusually inexpensive for so long has prevented market forces from weeding out failure and rewarding success, these economists said. Zombies make it harder for new companies to enter a market and for existing, more productive companies to grow.
...For now, interest rate increases are a non-starter given the economy’s profound weakness. But the Fed should require banks to beef up their reserves against potential losses by halting dividend payments. See
https://www.washingtonpost.com/business/2020/06/23/economy-debt-coronavirus-zombie-firms/?utm_campaign=wp_todays_headlines&utm_medium=email&utm_source=newsletter&wpisrc=nl_headlines.


Frank Portnoy has described the similarity between the consolidated debt instruments causing the current proliferation of zombie corporations (CLOs that represent corporate debt) are to those that precipitated the 2008 recession (CDOs based on home mortgage debt).  “After the housing crisis, subprime CDOs naturally fell out of favor. Demand shifted to a similar—and similarly risky—instrument, one that even has a similar name: the CLO, or collateralized loan obligation. A CLO walks and talks like a CDO, but in place of loans made to home buyers are loans made to businesses—specifically, troubled businesses. CLOs bundle together so-called leveraged loans, the subprime mortgages of the corporate world. These are loans made to companies that have maxed out their borrowing and can no longer sell bonds directly to investors or qualify for a traditional bank loan. There are more than $1 trillion worth of leveraged loans currently outstanding. The majority are held in CLOs.
...According to many estimates, the CLO market is bigger than the subprime-mortgage CDO market was in its heyday. The Bank for International Settlements, which helps central banks pursue financial stability, has estimated the overall size of the CDO market in 2007 at $640 billion; it estimated the overall size of the CLO market in 2018 at $750 billion. More than $130 billion worth of CLOs have been created since then, some even in recent months. Just as easy mortgages fueled economic growth in the 2000s, cheap corporate debt has done so in the past decade, and many companies have binged on it.
Despite their obvious resemblance to the villain of the last crash, CLOs have been praised by Federal Reserve Chair Jerome Powell and Treasury Secretary Steven Mnuchin for moving the risk of leveraged loans outside the banking system. Like former Fed Chair Alan Greenspan, who downplayed the risks posed by subprime mortgages, Powell and Mnuchin have downplayed any trouble CLOs could pose for banks, arguing that the risk is contained within the CLOs themselves.
These sanguine views are hard to square with reality.
...The prices of AAA-rated CLO layers tumbled in March, before the Federal Reserve announced that its additional $2.3 trillion of lending would include loans to CLOs. (The program is controversial: Is the Fed really willing to prop up CLOs when so many previously healthy small businesses are struggling to pay their debts? As of mid-May, no such loans had been made.) Far from scaring off the big banks, the tumble inspired several of them to buy low: Citigroup acquired $2 billion of AAA CLOs during the dip, which it flipped for a $100 million profit when prices bounced back. Other banks, including Bank of America, reportedly bought lower layers of CLOs in May for about 20 cents on the dollar.
Meanwhile, loan defaults are already happening. There were more in April than ever before. Several experts told me they expect more record-breaking months this summer. It will only get worse from there.
...If we muster the political will to do so—or if we avert the worst possible outcomes in this precarious time—it will be imperative for the U.S. government to impose reforms stringent enough to head off the next crisis. We’ve seen how banks respond to stern reprimands and modest reform. This time, regulators might need to dismantle the system as we know it. Banks should play a much simpler role in the new economy, making lending decisions themselves instead of farming them out to credit-rating agencies. They should steer clear of whatever newfangled security might replace the CLO. To prevent another crisis, we also need far more transparency, so we can see when banks give in to temptation. A bank shouldn’t be able to keep $1 trillion worth of assets off its books. See
https://www.theatlantic.com/magazine/archive/2020/07/coronavirus-banks-collapse/612247/.


Bloomberg has reported on the Fed invitation to a “party like no other” sponsoring junk bonds,
“You get an invitation to a party from the Fed, Treasury and Congress -- they offer to pick you up, take you home and bring you breakfast in bed the next morning,” said Bill Zox, a high-yield bond portfolio manager at Diamond Hill Capital Management.  “You know it is going to be a party like no other,” said Zox, whose firm oversees more than $20 billion in assets. Strong demand and low absolute borrowing costs encourage issuers to tap the high-yield market despite challenging economic data and renewed virus flare-ups.” https://finance.yahoo.com/news/junk-bonds-topple-monthly-sales-214812312.html.

For the first time since 2008 the Fed has acknowledged the increased risk to big banks of excessive credit extended to zombie corporations.  The Fed is restricting bank buybacks and dividends so that the banks will have enough capital on hand to cover anticipated losses.  See
https://www.washingtonpost.com/business/2020/06/25/fed-stress-test-coronavirus/?utm_campaign=wp_evening_edition&utm_medium=email&utm_source=newsletter&wpisrc=nl_evening.


Statiista has provided the following chart on billionaire wealth surging during the pandemic: 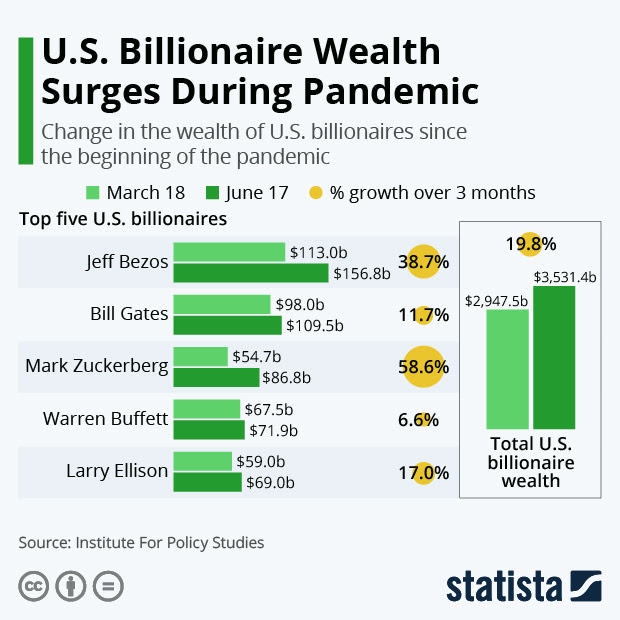